Is It Possible To Have a Good Relationship With Your Polar Opposite?

What is it about our polar opposites that can be so irresistibly attractive? Why does it seem so often the laid-back, mellow guy goes for the loud, extroverted social butterfly? Or the sweet, innocent girl can’t help feeling attracted to the stereotypical bad boy?

Right or wrong, some of us cannot seem to help ourselves! Is it simply because, as the saying goes, “opposites attract?” And can it all work out in the long run?

The Science Behind “You Complete Me”

There’s some social science behind this phenomenon. In a Psychology Today article called, “The Real Reason Opposites Attract,” authors Linda and Charlie Bloom explain that we often look to a partner to fulfill something that is missing within ourselves.

“Some of those unfulfilled longings have to do with their polar opposites,” they explain, “such as adventure, freedom, risk, challenge, and intensity.” That is to say, Jerry Maguire might be right on the money with his famous, dreamy “you complete me” line.

Have you always lacked that risk-taking, adventurous gene? The one that would propel you to go sky diving or explore the Alaskan wilderness? You may just find it in a spontaneous, active partner– the one you’ve had your eye on for some time.

And he might be the one to appreciate your steady, dependable side. In a perfect fairy tale, you could be the yin to each other’s yang. In the process of fulfilling those longings, Linda and Charlie Bloom suggest, you “generate a ‘tension of the opposites’ that produces the passion that sustains, deepens and enlivens relationships.” Doesn’t sound so bad, right?

So while there is evidence that opposites can indeed create and encourage passion in a relationship, and that differences can actually sustain a couple longterm in their ability to add excitement and new shared experiences, there’s also a downside.

First, let’s look at the successful opposites. Open the pages of any glossy gossip magazine, and you won’t need science to identify countless examples of opposites making a go of it in Hollywood.

We don’t know them personally, of course, but it sure seems like their opposing forces are working for them. Kidman and Urban have been married since 2006 (practically a lifetime in Hollywood circles).

Opposites Attracting in The Real World

What about us regular joes? In non-Hollywood life, there are plenty more examples of opposites attracting. All I had to do was ask around.

My friend Emma, now married to Matt for 10 years, notes that she and her husband fall on opposite sides of the introvert/extrovert scale. She’s the social butterfly, always looking for ways to get together with other couples, while her husband is the introvert who usually prefers to spend time with just his wife and kids.

How does their relationship still work? They take turns. Emma organizes all of the family barbecues and double dates, but she does so sparingly, so that she gets her social time while respecting her husband’s need for downtime and space. In the end, Matt appreciates meeting new people, and Emma has learned to appreciate some quieter moments.

My own relationship isn’t without some opposing action in the mix as well. Though my husband and I share certain core beliefs and values, we certainly have our differences, political ones being at the top of that list.

We decided early on– implicitly– that we simply don’t need to engage in political arguments with each other. It’s unlikely we would change the other’s mind anyway. While we can offer each other insight into the “other side” (one positive aspect of having differing perspectives) we don’t need to let political differences sour our marriage.

Another bonus of our opposite political loyalties is that we both respect the other party more just knowing that our partner is a member. In other words, it helps us reason that an entire political party can’t be delusional if our spouse is in it!

Keith and Jen, a happy couple with several children, may both be introverted, preferring small groups and quiet activities, but the similarities pretty much stop there. Whereas Jen can “talk and talk” (her words), Keith prefers to stay mum on most topics.

They also have very different interests and hobbies. Keith “loves all things history-related,” while Jen jokes that she would rather “endure endless physical pain than endure that stuff.” She prefers music and reading, but Keith? Not so much.

How can love survive? Jen says her husband’s interests and quiet nature bothered her occasionally at first, but then she “realized that the opposite side to that is a strong, solid, constant person who you know will just be there…and unlike me, he doesn’t complain.”

Good point. We can often learn to appreciate our opposite natures if we step back and reflect on their positive side. After all, those traits are often what attracted us to them in the first place.

Haddie and Jake, a couple with three kids, consider themselves to be compatible except for one recurring difference: he’s always punctual, and she’s always late.

How do they not let her chronic tardiness (and his unflinching punctuality) sour their relationship? Jake says he “takes a deep breath and helps get all of the kids ready so that she can focus on her own preparations.” For her part, Haddie makes an effort to be ready and on time when possible. And at the end of the day, they just enjoy being together with their family. “We try to laugh it off,” she notes.

What unites all of these couples is that while they have differences that may make them appear to be “total opposites,” they aren’t so different in their top priority– their relationship. Every one of them tries to let the little issues go in order to preserve the happiness in the relationship. They save their real battles for the big stuff.

The Problem with Opposites

Of course, we can also name countless examples of opposites who haven’t fared so well, such as the following strikingly odd pairs that didn’t go the distance: Angelina Jolie and Billy Bob Thornton, and Alanis Morrisette and Ryan Reynolds, to name some of the most noteworthy.

No one wants to end up the next Julia Roberts and Lyle Lovett– opposites who clearly couldn’t make it work in the long run. So what happens when a our partner’s love for adventure, or our love for solitude, is no longer igniting passion and excitement, but instead causing real, troublesome conflict in the relationship?

Relationship Help and Advice for Opposites

Good old Dr. Phil, marriage-expert extraordinaire, advises couples of all kinds to embrace “a spirit of acceptance. Men and women are different because they’re supposed to be! The last thing you’d want is to roll over in the morning and wake up looking at yourself.”

Not bad advice, really. It’s worth remembering that being different is often desirable, even if it stirs up negative emotions in the short-term. We don’t really want to marry ourselves, do we?

He also advises couples to pick their battles. There’s nothing helpful about nit-picking every single detail of your partner’s life. Doing so can make both of you miserable. As the couples in my interviews note, sometimes biting your tongue when you are annoyed really is the best route.

Being Alike Isn’t So Bad Either

Still, what if the conflict is constantly going beyond smaller arguments like, “you’re so messy; I’m so neat,” or, “you like the movies, I like t.v.?”

In eHarmony’s article “Do Opposites Attract?,” the site’s staff addresses the complications involved in marrying your opposite, noting that “forging a relationship with an opposite is so hard because every difference you have requires negotiation and adaptation…which will necessitate plenty of change [and] stress, and according to [psychologist] Dr. Warren, ‘If there are too many differences, you may not be able to survive all the strain involved in adapting to each other.’”

Therefore, it may be fun and exciting to have a few opposite characteristics (he likes baseball; she loves concerts), but it would be wise to proceed with caution if entering into a relationship with someone who truly disagrees with all of your beliefs.

Finding someone with shared values and core beliefs can provide a solid basis for a relationship. I know that having my husband on the same page with me as far as religion, children, and education has prevented countless arguments over our fourteen years together. Being alike in those realms isn’t so bad at all!

Psychologist Dr. Gail Saltz, wrote an article that highlighted a 2009 study in the Journal of Personality and Social Psychology. She notes that the study “found that among newly married couples, there was a strikingly high similarity to each other in the area of attitudes and values, and smaller amount of similarity…when it came to elements of personality.”

This finding goes along with my informal interviews. The couples I spoke to often considered themselves (or many parts of themselves) to be “opposite” to their partner, but when I delved deeper, the differences were on the surface level (she likes parties; he likes being home) and not the deeper, core values (such as the “he wants a family but she doesn’t” variety).

Interestingly, I didn’t speak to one person who thought they were “exactly like” their partner. Which is probably a good thing. While constant conflict can’t be good for any relationship, it appears that couples can actually enjoy the more subtle sparks that make them different. Differences– and learning about each other– keeps things interesting and exciting.

We don’t want to marry ourselves, but we don’t want to fight all the time either. Sharing core values in regards to the Big Stuff can pave the way for a smoother relationship in the long run. The sweet spot, it appears, is somewhere in the middle.

What is your experience with dating your opposite? Do your differences positively or negatively affect your relationship?

MORE: Why Do We Pick Partners Who Are Bad For Us? 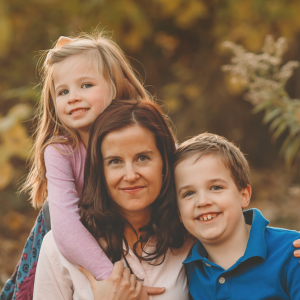 Julia Arnold is a freelance writer living in Minnesota with her husband and two young children. She writes about the less glamorous side of motherhood and marriage on her blog, Frantic Mama, and she has contributed to various publications, such as Mamalode, Scary Mommy, and What the Flicka, as well as to the relationship anthology, Clash of the Couples: A Humorous Collection of Completely Absurd Lovers’ Squabbles and Relationship Spats. You can also find her on Facebook.