I was anything but average back in high school. My vibrant and shocking wardrobe was not just an outward appearance, but a way of life, as I was always rebelling against social norms.

I enjoyed punk music (attending concerts and moshing my head off was a weekly event) because of the concept and ideas they shouted about. It wasn’t enough to just listen to their way of life, but try my best to live it. Anarchist punk bands changed me forever and I soon became obsessed with promoting a world of equality and peace. However, I was also diagnosed with depression at the age of 13 and the negativity that surrounded the punk scene – constantly shouting about what was wrong in the world instead of right – only pushed me further into darkness.

With a family history of addiction and mental illness, it wasn’t long before I was self medicating with alcohol. All I could think about was how terrible people were: the government, corporations, racists and sexists and everyone in-between. By the time I met my now husband, I was a high school dropout with the thought that I literally had no future, and didn’t want one.

He and I were bad for one another from the start.

Our friendship was built on nothing more than odd circumstances and enjoyment from teasing one another. Truth be told, we actually hated each other for years prior. However, since his parents had kicked him out, my parents allowed him to stay with us in the basement. This was during a time when my parents had just lost their business and were so consumed in their financial problems that I was left to practically finish raising myself. My partying and depression may have lead to me dropping out of school, but I had never gotten into trouble with the police or did hard drugs, and I guess because of that my parents didn’t seem to think they needed to intervene.

Nick and I fed into each others insecurities and convinced one another that downing whiskey every night wasn’t such a bad thing. It was a crazy time in our lives, full of alcohol, cigarettes and crazy antics. And although we lived and drank together, we never had sex. I couldn’t look at him that way for a long time. To me, he was arrogant and rude, and I know he didn’t have fond thoughts of me at the time either.

But, after months of him living in my basement and drinking every night, we finally slept together. As a result of being drunk and stupid, no protection was used. After that night we decided to try dating one another and we became inseparable. My parents were still trying to piece back their own lives, so although he stayed in my parents basement they hadn’t really noticed we were anything more than friends. I wonder if he would have been allowed to stay there if my parents had known? But they didn’t, and he did stay.

It was only a few weeks into our relationship that I realized I was pregnant.

I was back in school at the time, and Nick was looking for a job (he already graduated). I kind of knew sooner than I admitted. Not getting your period is usually the first sign, but the queasiness I felt was something I had never experienced before and I knew something was wrong. I also knew I had to tell Nick, and since we already talked about our views on abortion before, the solution to our problem was pretty clear. The only question was, how does a person get one?

Of course I had to do a pregnancy test first, mostly because I was secretly hoping I wasn’t pregnant. Athough I already knew the answer, seeing those two pink lines made it real. The next few days after peeing on that stick is now a blurriness of doctor visits, research and phone calls. Until, that is, I went to the walk-in clinic to get a mandatory ultrasound. Up to that point in my life, I had never been so nervous. Nick came with me to the clinic but I refused to let him come into the room. Looking back, I wish I hadn’t; it would have been nice to share that experience together. When the technician asked me if I wanted to see, I looked, and it was at that exact moment I knew I was going to be a mom.

When I finally told him my decision to keep our baby, I remember telling him that because I had made the decision completely on my own he could make his own decision, too – he could stay, or he could leave – and I wouldn’t harass him. To my surprise (and happiness) he chose to stay.

I remember that time as if it happened just last year. The doctor visits, the endless nights and lonely days. Being a teen mom is definitely not something I would wish on anyone; it’s difficult and scary and truly makes life harder. Nick had started working with my dad, and I had to drop out of school once again after completing my exams that summer. He worked all the time, and I spent day after day basically by myself: my friends had all vanished, my sisters were too busy with their own lives and my parents also worked full-time. To make things worse, I had no idea what I was doing.

But the strangest part was trying to figure out how Nick and I fit together now that we were going to be parents.

Becoming parents forced us to grow up and consider our futures. For a couple of teenagers who spent the past couple of years trying to do anything but, it was no easy task. That year was the most confusing year of my life!

Not long after our daughter was born we bought a car and moved into our first apartment. I’d be lying to you if I said that first year living on our own was hell, but to be honest, it was kind of perfect. He made good money and I kept our family happy and healthy; we had a great group of friends again, my parents were supportive and we were very much in love.

But over time, things change, and life got hard.

When Nick got laid off from work, a job he had worked up to through promotions, he didn’t have the education required to get a similar one. We were both forced to work part-time jobs at minimum wage and it was difficult adjusting to a lifestyle without money. I was only 19, with no education (although I was working towards it) and a two-year-old daughter. Nick had experience, but no education either, and that left us both without many options. We struggled to make ends meet, but somehow we got by.

Over the years our relationship has been put to every kind of test there could possibly be. Until recently, it seemed as if each year brought new and more difficult circumstances upon us, ones that at times felt too impossible to get through. When I think about all of the things Nick and I have made it through, from being teen parents, to being unemployed and in poverty, to events even darker than that, I know that each one has only made our relationship stronger.

There have been times when I didn’t think we would make it through.

I strongly believe the reason we have been able to make it through every difficult situation, every horrible event and circumstance in life, is because we grew up together as a family. We have a long history, a history that leads all the way back to my parents basement, back to a time when I was just 16, and he and I somehow managed to fall in love, even though we first hated each other.

Being teen parents is not something anyone should do intentionally, no matter the circumstances. It’s difficult and tiring and it does make life much, much harder. When I was younger I would often think about what our lives would have been like if I didn’t get pregnant. Would we still be together? Would I have stayed in school and went to university, or would I have dropped out anyway? Would I have started a career sooner? What kind of person would I be?

But thinking like that doesn’t make any sense because I don’t know what the answer to those questions would be. What I do know is that I graduated high school, and college; that I have a career I love; that I’m happily married and we have a beautiful daughter. That all of the things we had to go through, because we were teen parents, has only made us stronger, as individuals and as a couple.

MORE: How To Date As A Single Mom: One Savvy Mama Spills Her Secrets 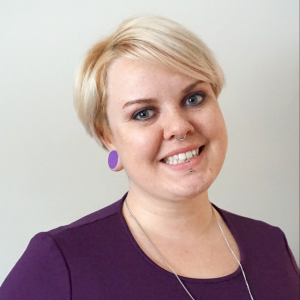 Cole is a writer, artist and amateur photographer. She has written multiple blog posts and articles for a variety of publications, including her own site Peace and Chaos. Cole loves spending time with her husband and daughter, and their cat Oliver, and is obsessed with posting pictures of them on her Instagram.